Do the Rumblings from Advisors Indicate an Approaching Storm?

In late August of this year, Merrill Lynch rolled out “Project Thunder,” a two-month campaign that appeared to be aimed at staving off increasing advisor attrition and addressing the frustrations of those still at the firm.

In a much publicized statement, Andy Sieg, President of Merrill’s Wealth Management unit, described Project Thunder’s goal as “to make it easy for all Merrill employees to do business, for our advisors and their teams to grow and achieve success, and to deliver for clients through extraordinary service and capabilities.”

With their new commitment to listen to its advisors, Merrill introduced changes that include functional updates to the “Merrill One” advisory platform, a reduction in turn-around time for clients looking to join parent Bank of America’s donor-advised funds, the addition of mortgage lending specialists to alleviate bottlenecks, and other procedural updates. Plus, the firm also offered brokers greater leeway in sending greeting cards to customers and prospects—which likely was one of the most commented on aspects of all.

At the same time, Sieg has been reassuring brokers in the field that he’ll limit compensation changes for 2022. In fact, in a town hall meeting held earlier this week, it seems like they’re keeping their word.

But will the campaign work to halt the tide of attrition? Put another way, is it too little too late?

I’ve spoken with many Merrill advisors since Project Thunder was announced. The common theme they shared is that despite this effort, leadership is still quite disconnected from their real concerns.

So as the program rolls on – now with monthly changes rather than weekly – here’s what I would do to attempt to reinstill loyalty:

Merrill, to be sure, is a world-class firm with a strong platform, technology stack and brand respected more than most in the industry.

So for some, the firm’s acknowledgment of a problem and its attempt at change may be enough to alleviate concerns. There are also plenty of loyalists, who are dyed-in-the-wool Merrill lifers who have built great books over decades at the firm and plan to end their careers there. And there are certainly others who would much prefer the path of least resistance: That is, to stay put and take a “wait and see” approach.

But if moves in recent weeks are any indication of what we can expect, we’re likely to see continued attrition.

Merrill advisors desire greater freedom in how they serve clients and grow their businesses, and the firm has a strategic goal to better integrate the brokerage within the much larger bank. No doubt, there’s a good business strategy behind their actions, but is there still room for an entrepreneurial-minded advisor within the greater organization?

A storm is indeed brewing. It will be interesting to see which way it turns next.

Answers to the most frequently asked questions when considering a transition from Merrill Lynch—available for download exclusively for Merrill advisors.

Get email notifications featuring the latest articles and episodes from the industry’s leading knowledge source for financial advisors. 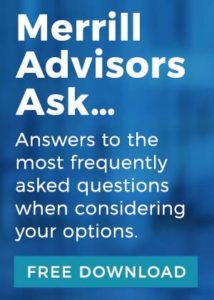 More on the Topic

Industry Update on Merrill’s Project Thunder: Too Little Too Late?
This podcast episode delves into what’s bugging advisors most and if it’s all too little too late. Listen->

Merrill Advisors Ask…
Answers to the most frequently asked questions when considering a transition from Merrill Lynch. Download->

Why Are So Many Merrill Advisors Moving
Bracing for the Next Chapter. Read->