Motivated by the Long Game: Why a UBS Breakaway Left a Deal Behind for Independence with Summit Financial

There are so many great things about this breakaway story that we had a difficult time trying to pinpoint that “one thing” that was unique and buzzworthy.

But the reality is that Monish Verma’s break from UBS to independence doesn’t have one special thing that we can share with you.

Monish describes what is an incredibly instructive journey, starting with the thought process when considering change, on through to due diligence and decision-making, and ultimately how his choice to go independent is resonating today.

A wealth management career that started in 1995 with Dean Witter and later Morgan Stanley, Monish moved to UBS in 2009 with $60mm in assets. As a sole practitioner, he set his sights on a path to grow the business and later added a sales associate.

And it was that focus and a concerted effort to drive referrals that accelerated the growth of assets under management to over $350mm.

Monish is clear to share his gratitude for all that he was able to achieve at UBS but one thing was lacking: Autonomy.

He wanted greater agency in how he served clients, grew the business and hired team members—but he was limited by what UBS allowed.

So he explored options in the landscape, coming close to choosing a transition deal with an outsized check—yet it was the strings attached that made him think twice.

Instead, Monish was attracted a supported independence option from Summit Financial and in May of 2021, he launched Vardhan Wealth Management.

And in the process, sold a portion of the business to gain equity in Summit—a move that he describes as a “partnership.” 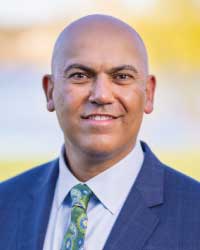 In this episode, Monish shares his journey with Louis Diamond, including:

Monish shares a journey that offers valuable lessons on how clarity of goals and vision can help lead you toward the right destination. And even when presented with what was an outstanding deal in the short-term, he saw greater value and opportunity in the long-term.

Are You Selling Yourself Short by Selling Equity?
Here are 5 things to consider. Read->

What you need to know about UBS leaving the Protocol
What to be aware of before allowing your emotions get the best of you. Read->

Due Diligence: A Path to Self-Discovery, Not a Destination
Seeing yourself through the lens of opportunity can inspire a new way of thinking about your business and allow you to reassess priorities and goals more freely. Read->

He is a Chartered Retirement Plans Specialist℠ with more than 25 years in the wealth management business.

He graduated Michigan State University with a Bachelor of Science in Communication Pre-Law and a minor in Business.

Away from the office, Monish is active in the local community. He is past president and current member of the INDO American Chamber of Commerce and charter member of the Indus Entrepreneurs, Michigan Chapter. He is an avid tennis player. Monish and his wife, Roshnee, reside in Novi, Michigan and are the proud parents of three wonderful boys.