The Wealth Management Landscape At A Glance: What Financial Advisors Need to Know

The Wealth Management Landscape At A Glance: What Financial Advisors Need to Know

The ever-expanding wealth management industry landscape represents a waterfall of possibilities for every advisor and their clients. And having a clear understanding of the environment you’re building your business in is critical—regardless of whether you have a desire to move or not.

Most advisors – regardless of whether they’re well entrenched and perfectly content with the status quo or hell bent on making a move – struggle to understand how the industry landscape has evolved. And it comes as no surprise as the world of wealth management has changed dramatically, accelerating at a fast pace particularly over the last year or two.

Plenty of advisors share with us that it’s hard to visualize where their firm fits within the context of the waterfall of possibilities—that is, understanding how their firm compares to others, especially when they’re witnessing so much change and advisor movement overall.

Up until two years ago, my firm, Diamond Consultants, put together an annual white paper called, The Landscape of the Industry. It represented a Herculean effort on our part.

Yet within a day of publishing, it became outdated.

Why? Because that’s how fast the wealth management industry is changing.

What remained relevant was the “continuum” in which we described the landscape. Essentially, breaking it down to a series of buckets or categories of firms and models where a financial advisor could choose to practice.

This continuum (downloadable here) identifies the most restrictive models – the biggest banks and brokerage firms – on the far left. And to the far right, the greatest level of freedom and flexibility, a characteristic of the RIA space. 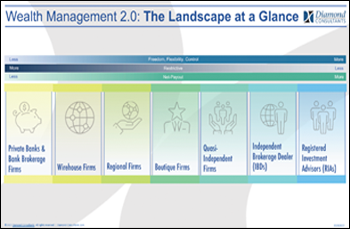 Given the amount of growth we’ve seen over time, truly understanding all of the options may seem more overwhelming than it was years ago, yet the resulting optionality is a good thing. It means that you, as an advisor, are more likely today to find a model that best suits you, your clients and your business—where you may not have in years past.

The banking model – which includes firms like JP Morgan Private Bank and Wells Fargo WBS – provides a built-in referral mechanism which can drive growth, but also tends to be the most restrictive and least entrepreneurial. The model offers the least amount of control for the advisor as well. And many who work for private banks worry about being vulnerable to losing control over the businesses they built—to having their assets distributed to less successful advisors. Many private banks offer no transition money and pay, like JP Morgan Private Bank, on a salary bonus comp plan. Wells Fargo is actually a notable exception to that, offering aggressive transition deals.

While on the one hand, a bank model is a great way to grow a business because of a built-in referral mechanism, the downside is that bank assets are usually harder to move because the assets are tied more closely to the bank. And the firms are usually not part of the Protocol for Broker Recruiting and so employment agreements, which contain enforceable restrictive covenants, will govern the move.

These are the most recognizable names in the space: Morgan Stanley, Merrill Lynch, UBS and Wells Fargo. They have world-class platforms, outstanding technology, and are a solid training ground for new advisors.

These firms tend to be more bureaucratic and manage to the masses—with many wirehouse advisors frustrated by the lack of freedom, flexibility and control. Yet they’re solid brands with a plug-and-play environment plus have the advantages of scale and deep pockets, so platforms and technology are often exceptional.

With the exception of Merrill, each have demonstrated they’re back in the recruiting game with strong deals—good news for those looking to change jerseys.

Moving right on the continuum, next are the regional firms. These firms have made a massive leap in recent years, shedding their former reputation of having sub-par leadership, technology and platform. In recent years, regionals – such as Raymond James, RBC and Stifel – turned the tables by hiring top leaders from the big brokerages and investing in technology and platforms. The result: A best-of-both-worlds option for advisors who no longer feel as though the wirehouse model works for them, yet see independence as a bridge too far.

They have many fewer advisors and less layers of management than their wirehouse counterparts, and offer moderate to strong transition deals, varying firm by firm.

This is the category that’s changed the most. There was a time in the not-too-distant past when the top boutique firms included names like Lehman Brothers, Bear Stearns, Credit Suisse and Deutsche Bank—that is, until the financial crisis of 2008. These firms had brand-cachet, a more exclusive culture with many fewer advisors than their wirehouse counterparts and attracted high net worth-focused talent.

And when those firms disappeared, a gaping hole was left in the landscape—but smart leaders jumped in and filled that gap. And those boutique firms have been replaced by the likes of Rockefeller Capital Management, First Republic Wealth Management, William Blair and Jefferies, to name a few.

It’s a model that’s resonated with top advisors—with Rockefeller and First Republic, in particular, crushing it. These firms have hit the mark in terms of features these folks are looking for: a more intimate culture with a community of like-minded advisors, access to leadership and aggressive transition deals.

The independent space has matured very rapidly over the past decade, offering a wide variety of models that offer different levels of support, along with the ability to control one’s P&L.

The first sub-category within the independent space is the independent broker dealer or IBD model, such as Wells Fargo FiNet (the IBD arm of Wells Fargo), LPL Financial, Commonwealth and Cambridge. These firms are about independence, but with strong back office support. Plus they offer nice transition deals—with Wells Fargo FiNet and LPL paying more than Commonwealth and Cambridge. This model is ideal for someone who wants independence with some support but doesn’t do a lot of fee-based business.

The far-right end of the continuum is the Registered Investment Advisor (RIA) space—comprised of fee-only RIAs and hybrid RIAs. The RIA space is about complete control, open-architecture and access to what we call the “whole of market.” Advisors can shop the Street and create competition for price and service for virtually anything—lending, structured products, alternative investments, trust and estate capabilities, insurance and everything in between. It’s also for the advisor who really wants to build an enterprise and eventually monetize his business for top dollar. And custody is with an institutional custodian, the likes of Pershing, Fidelity and Schwab.

But because in the RIA space the advisor is responsible for his or her own compliance and oversight, many prefer a category called supported independence that falls in between IBDs and RIAs. This has become a hot model for advisors who want to be independent, but don’t want to deal with all of the minutia – the middle- and back-office work – that go along with running an independent business.

In the last several years, the category of supported independence has taken off more than any other. Think Dynasty Financial Partners, Sanctuary Wealth and Kestra Private Wealth Services as well as LPL and their new premium model and Steward Partners—each offering their own flavor of independence. It’s a category that so expanded, I recently did an entire podcast episode to provide the key differentiators for each, plus a special episode with some of the key players, so be sure to give them a listen to learn more.

The ever-expanding wealth management industry landscape represents a waterfall of possibilities for every advisor and their clients. And having a clear understanding of the environment you’re building your business in is critical – regardless of whether you have a desire to move or not – in achieving your best business life.